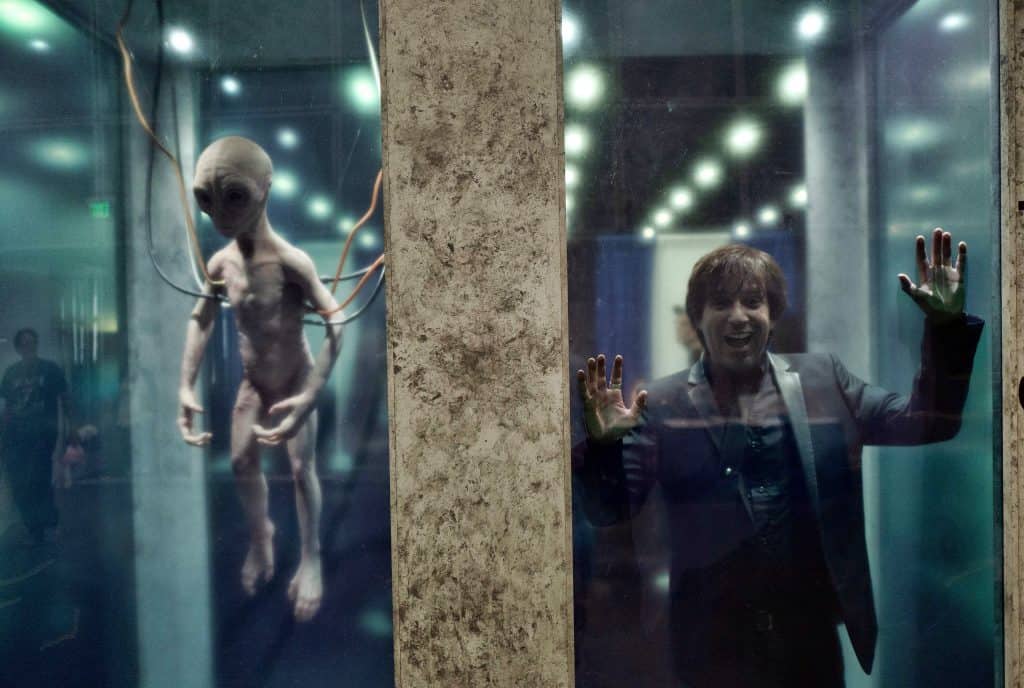 In March, we spoke with best-selling science-fiction author, Steven-Elliot Altman, the writer for Project Blue Book: Hidden Mysteries — the first in a series of exclusive game releases Legacy Games has planned for 2021 and beyond.

Project Blue Book: Hidden Mysteries was recently released for PC on Legacygames.com and on Steam. 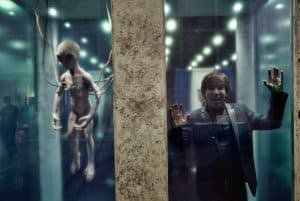 Steve at Alien Con 2019 in the tank with Otto The Alien From the TV series. Photo courtesy of Steven-Elliot Altman.

What’s your involvement with the new Project Blue Book: Hidden Mysteries PC game, and the interesting back story on how you got involved?

Hey John, I’ll start out by saying it’s a good time to be working in the videogame industry. With players stuck at home during the pandemic, games are a welcome distraction.

I had been working with A+E Networks and History Channel on another media tie-in game, Ancient Aliens: The Game, which was doing quite well in the market. Then the executives approached me about doing another game based on their new series, Project Blue Book. I read the script for the show and loved it. The Swedish game developer Three Gates signed on to build the game and hired me as their writer and narrative designer. I love the TV show, so it’s been a huge honor to help usher the story and characters into the gaming platform.

What are your thoughts on Hidden Mysteries and how does it compare to the other PC games you worked on previously?

Good question, John. I think this game has brought television and gaming one step closer. You see, the show follows characters that are investigating real, declassified UFO investigations. We use those same characters in-game, but you, the player, are an additional investigator working alongside them. Then you investigate cases. Some cases are adaptations of episodes from the show, with additional new scenes and witness interviews, while other cases are new original cases I created from actual declassified U.S. Air Force case reports. So, the main difference in working on this one was laying out the game’s story in a way that mimicked the 1-hour series drama format of the series.

If there was a particular storyline or narrative that Hidden Mysteries speaks to, what is it in your own words?

I guess I tried to flesh out the feeling of wonder the characters have as they investigate things that are literally out-of-this-world. But the show and the game are also dealing with another serious issue: Disclosure. What will happen if there really are aliens? And what happens if the world finds out? The characters feel the pressure of this issue and have to first grapple with it personally — than with a responsibility to society as a whole.

What are your thoughts on UFOs and do you believe in them?

Funny you should ask that. Since I’ve now written several UFO-based games I attend several UFO-based conventions and I’d always answered that question with, “Well, I am a science fiction author, and my own understanding is that statistically speaking the odds we are alone are very small. And you can’t watch multiple seasons of Ancient Aliens and Project Blue Book and not have questions. So, yes, I’m open to it.”

Have you personally had any UFO encounters, or know of anyone who has?

In short, yes. Keep in mind that U.F.O. means Unidentified Flying Object (a term which was coined by Dr. Hynek, a character in both the series and the game), not spaceship. Quite recently I did see something in the sky myself that defied everything I know about aerodynamics, so… I guess I’ve moved into the strong-lean-toward-believer column. And my job writing these games puts me in frequent contact with many people who study UFOs, so I’d say that’s a big YES on knowing others who have had encounters.

Which of the Project Blue Book characters do you relate to the most?

I guess I relate more to Aidan Gillen’s character, Dr. Hynek, who desperately wants to find the truth behind these sightings. The other Air Force team members are too busy following orders, and trying to keep information closely guarded. I’m not very good at following the chain of command and obeying orders.

Who is Hidden Mysteries ideal for, which segment of the population?

Anyone who likes investigative or adventure games should enjoy it; particularly anyone interested in UFOs, fans of the TV series, or people who enjoy the retro-1950s feel of the game, which is when the story is set.

What are your thoughts on working with Legacy Games and how are they in comparison to other companies you worked with?

Three Gates built the game to be played on mobile devices and tablets for IOS and Android, but Legacy really took us seamlessly over the rainbow onto the PC and steam platforms. The Legacy team took the time to get under the hood of the game and usher in all the changes the new platforms required — but then went the extra distance and made some fine platform-specific additions, like achievement levels for Steam. I’ve had some experiences with other companies that did not have the same loving attention to detail, so I’m a big Legacy fan.

Any other items not covered about the new Hidden Mysteries PC game that we should know?

You don’t need to watch the show to enjoy the game — but it wouldn’t hurt!

What are some of the things that people get wrong about video game writers?

The first question I’m asked when I tell people what I do is always, “There are writers for videogames?” Yes, there are. Because the genre has evolved from games like Ms. Pac Man — where the only line of dialogue was, “They meet!” to a whole new world of interactive storytelling where the script of a game typically dwarfs the length of a TV or feature film script. And the second question is often, “So you write the code?” And the answer I give is, “No, I just write the story. I could code it but it would take me several decades.”

If you’re looking for something small that will fit into that real or metaphorical stocking over the fireplace, look no further. Our DVDs